A ductless air conditioning system includes a low-profile air handler that is usually mounted on a wall inside the room or in the ceiling. The system operates with two primary components: an outdoor compressor/condenser, and the wall- or ceiling-mounted indoor air-handling unit. The power cable, refrigerant tubing, suction tubing, and a condensate drain are housed in a conduit that links the outdoor and indoor units. A ductless system is ideal for small spaces or for older homes or buildings where installing ductwork for a central air system is simply not feasible.

A traditional central air system uses ductwork to circulate the cooled air through a home or building. It is the most common type of central air system in the United States. One component is located outside and one component is located indoors. They work together using coils to cool the air in your home, fans to circulate the cool air through ductwork installed throughout the home, and fans to discharge the warm air to the outside.

One of the most important considerations is whether you already have ductwork in place. If your home already has ductwork, you will probably find a traditional central air system to be more cost-effective. On the other hand, if you will have to install ductwork, it will add significantly to the overall cost of a new system. You may find that going with a ductless system is more cost-effective for your home.

One consideration is whether you or a family member is sensitive to airborne contaminants such as mold, allergens, dust, pet dander, and viruses. If so, the filtration process used with a traditional central air system may be more suitable for you. In some systems, you can use filters that remove most of the indoor air pollutants. You can also add components that destroy most airborne contaminants and improve the indoor air quality.

Size of Your Space

These air conditioning systems take up very little space for the comfort they provide. In addition, they pack a lot of power. A single outdoor compressor/condenser can support up to four indoor air-handler units. That means one outdoor unit can cool up to four rooms. A mini-split air-handler takes up such a small amount of space that it works well in small areas such as single or multiple room additions to your home or office. If your space is less than 2,000 square feet, a ductless system may be better for you.

For a larger home, a traditional central air system will be more effective. Though the ductless units are powerful for their size, they will not provide enough cooling power for a larger home. 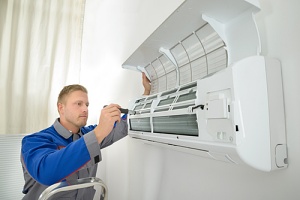 One advantage of a traditional central air system is the home’s ductwork is also available for heating the home. Some systems function as both an air conditioner in summer and a heat pump in winter. If you want to replace a furnace and install a new air conditioning system at the same time, you can opt for a system that combines a central heating system and a central air system in one cabinet that is all housed outdoors. These packaged systems are another way to save space because they eliminate the need for a separate furnace indoors.

Ductless systems also offer a heat pump feature. In winter weather, the ductless system can reverse its airflow direction and bring warm air in. This may be an option for you if you live in an area where cold temperatures do not fall below about 20° F. It may be all you need, depending on your climate. In colder climates, it may provide you with enough supplemental heat that you can use your furnace less.

In general, the ductless AC systems are more energy-efficient than the traditional central air system. For one thing, the ductwork is often a source of leakage. The system itself is larger and requires more power to operate. Note that the top-of-the-line ductless AC units have higher potential energy efficiency (up to 27 SEER) than the top-of-the-line traditional central air systems (21 SEER).

Additionally, a ductless system allows you to cool only the space you are using, and only when you use it. You do not have to cool empty rooms. That kind of “as-needed” or zone control service is difficult to achieve with a traditional central air system. Zone control is available in newer central air systems, but it is expensive because it requires upgrades to the ductwork and vents.

A ductless AC system will require your rooms to have the air handler unit mounted on the wall. Accordingly, the component is likely going to be visible, though you may be able to use some interior design techniques to make it somewhat inconspicuous. On the other hand, it does not require vents in the walls or floor because the system does not require ductwork to circulate the airflow.

Make an informed decision before you purchase a new air conditioning system which is one of the most expensive pieces of mechanical equipment in your home. Talk to the professional HVAC experts at Presidential Heat and Air to discuss your needs and the air conditioning systems and options available to you. Contact them for more information regarding ductless AC and central air systems.

Schedule Service Online
or Request a Call Back