Healthier Air for the Entire Home 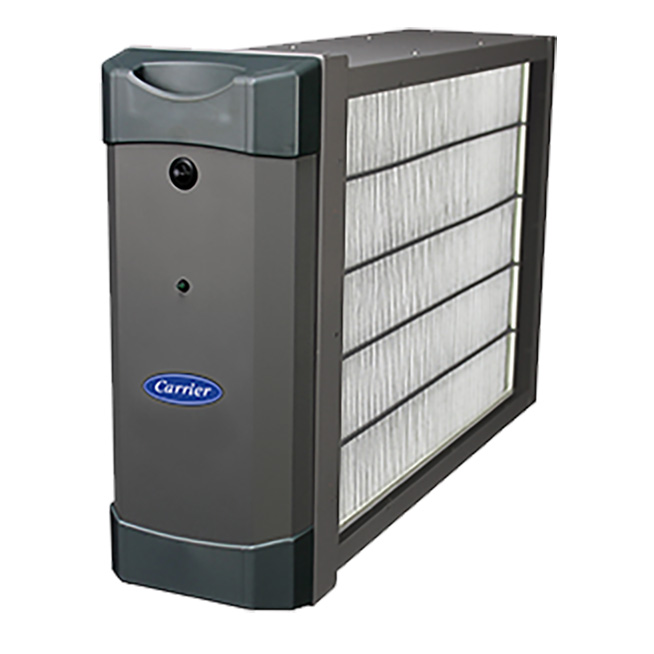 The patented Infinity Air Purifier is ideal for homeowners with allergy concerns, those susceptible to airborne germs, such as infants and the elderly, and those sensitive to the effects of molds, pollen, pets and more. Using the same technology trusted to protect secure government facilities and hospital room patients, the Carrier® Infinity Air Purifiers offers extremely high air filtration efficiency and patented germicidal technology so effective they even capture and kill airborne pathogens such as bacteria, viruses and mold. And unlike many portable air cleaners, it runs silently and can treat the air throughout your entire home. In fact, they clean over 100 times more air than some of the popular portable units.

The Infinity Air Purifier is Carrier’s premier air cleaning and purification solution with patented Captures & Kills® technology. It provides a high tested germicidal effectiveness with a 99% inactivation rate against select viruses and bacteria. At MERV 15, it achieves the highest air cleaning efficiency of any Carrier model. The replaceable filter cartridge can provide several months of filtration.

Step 3: Patented, state-of-the-art technology kills select captured viruses and bacteria** and can prevent further growth of bacteria and fungi on the filter.

Independent lab testing on the Infinity air purifier technology has shown a 99% germicidal effectiveness (inactivation) within 24 hours for the following:

How to Choose an HVAC Contractor
Download Free Guide

Schedule Service Online
or Request a Call Back